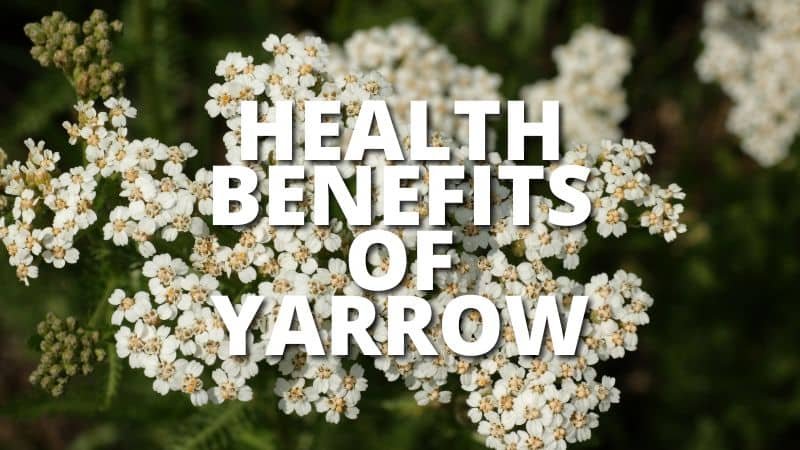 Today is an excellent day to learn more about yarrow’s health advantages.

The whole yarrow plant is said to be edible and healthy, but just a small amount should be consumed.

The leaf has a strong odor. Its blooms and leaves are both bitter and astringent.

The young leaves may be eaten fresh or added to salads. They may also be made into tea.

Please keep reading if you want to find out more.

1. Yarrow May Be A Traditional Cold Cure

Breaking a sweat is the most popular and well-established traditional method of treating a cold.

It is said that consuming yarrow tea might increase sweating.

This is because yarrow may help open up the pores and blood vessels under the skin, which makes it easier for our bodies to sweat out toxins.

2. May Be A Solution For Menstrual Problems

Some people say that yarrow can also be used to make bleeding start in certain situations.

Amenorrhea is a disorder in which menstruation is missing due to abnormal reasons.

Combined with plants such as rue, motherwort, and partridge berry, yarrow is classed as an emmenagogue.

Despite the fact that it has been done for centuries, there is no study to back up the claim of this benefit.

3. Yarrow May Be Used To Treat Skin Problems

Yarrow may also be used as a skin ointment, mostly to treat skin issues such as eczema, which is a kind of skin inflammation.

Using yarrow as an ointment can help soothe irritated skin and speed up the healing of open wounds by killing bacteria and other germs that can cause infections.

Another herb that may be useful for your skin care regimen is Geum urbanum. More information on how it may assist your health may be found here.

4. May Be Used To Treat Wounds And Bleeding

Achilleine, a unique chemical component discovered in yarrow, has the potential to halt bleeding.

It not only helps coagulate blood, but it may also help dull pain and keep the wound from becoming infected.

One study even showed that yarrow might be used to cure burn wounds caused by napalm, a blistering substance used in war.

With such properties, it’s no surprise that yarrow is also known as “soldier’s woundwort.”

Multiple sclerosis, Alzheimer’s, Parkinson’s, and encephalomyelitis are all brain diseases that have been shown to get better with yarrow.

According to recent animal research, yarrow extract decreased the severity of encephalomyelitis as well as the brain inflammation, spinal cord, and brain damage it produced.

Also, a study with mice found that the antioxidants in yarrow could stop seizures, making this plant a possible treatment for people with epilepsy.

Additional rodent studies suggest that this plant may help to prevent Alzheimer’s and Parkinson’s disease symptoms, including memory loss and deficits in physical mobility and muscle tone.

These investigations, however, are preliminary and confined to animals.

6. May Help With Certain Gastrointestinal Issues

Aside from anti-inflammatory characteristics, yarrow also possesses antispasmodic properties, which means it may help relieve spasms caused by involuntary muscles in the digestive system under certain circumstances.

Because of this, taking yarrow internally may help relieve some stomach and intestine problems, such as diarrhea, gas, and stomach pain.

According to studies, the antispasmodic benefits are mostly due to flavonoid chemicals found naturally in the plant.

Inflammations are to blame for several of our internal organ disorders.

Take a sore throat, a stomachache, or some lung problems as examples.

In many cultures, yarrow has been used for a long time as a traditional medicine to treat inflammation.

This is because yarrow extracts are thought to have several anti-inflammatory effects.

Many studies have shown that yarrow extracts include flavonoids and sesquiterpene lactones.

These chemicals are renowned not just for their anti-inflammatory activities but also for their astringent qualities, which are the ability of some substances to pull together or constrict soft bodily tissues.

That is most likely why yarrow may be used both internally and topically to treat inflammations in diverse body areas.

8. May Aid In The Treatment Of High Blood Pressure

Yarrow is a complete therapeutic plant since it includes anti-inflammatory, anti-spasmodic, and vasodilatory qualities.

According to 2013 research, yarrow has the capacity to decrease high blood pressure as well as relax the blood vessels and airways, which improves breathing.

Studies on animals show that yarrow could be used to treat high blood pressure conditions that cause the heart to beat too fast.

9. Yarrow May Be Effective As A Sedative For Anxiety Disorders

Research published in 2012 reported on the anti-anxiety properties of yarrow in animal models.

The hydroalcoholic extract of yarrow was found to help with anxiety, both short-term and long-term.

This suggests that the effects do not get weaker with repeated use.

There is also evidence that yarrow has comparable effects to diazepam, a medicine often used to treat anxiety.

Asthma symptoms may be alleviated by using yarrow.

That’s because yarrow has a property known as “bronchodilation,” which means it may help relax the bronchi and reduce inflammation in the airways.

Because inflammation and stress in the airways are two of the major causes of asthma symptoms, using yarrow may help relieve them.

The following are just a few of the many health advantages of yarrow.

My favorite health benefit of yarrow is that it may alleviate inflammation symptoms.

When it comes to arthritis care, inflammation is a major worry. My prior posts may have already informed you that I suffer from arthritis.

Which one of these health benefits do you think is the most important?

Before using yarrow in any form, please consult your doctor. This is especially important if you have health issues.

Please share this information with your friends and family if you feel it will be valuable to them.

I’ve published a few articles on how certain herbs and spices might benefit your health. More information on them may be found by clicking here.

Thank you very much!

Today is a splendid day to discuss the potential health benefits of water spinach. What is water spinach? Water spinach, or Ipomoea aquatica, is a nutritious and delicious vegetable that has...

Some of the links in this post may be affiliate links, which may pay me a commission if you opt to buy a product or a premium plan. ℹ️ The information on this site is only for educational and informational purposes. It is not meant to replace medical advice, diagnosis, or treatment from a professional. 👩‍⚕️ If you are concerned about your health or have questions about it, you should talk to a doctor or health professional. You shouldn't use the information on this site to figure out what's wrong or how to treat it. If you have questions about a medical condition, you should always talk to a qualified healthcare professional.